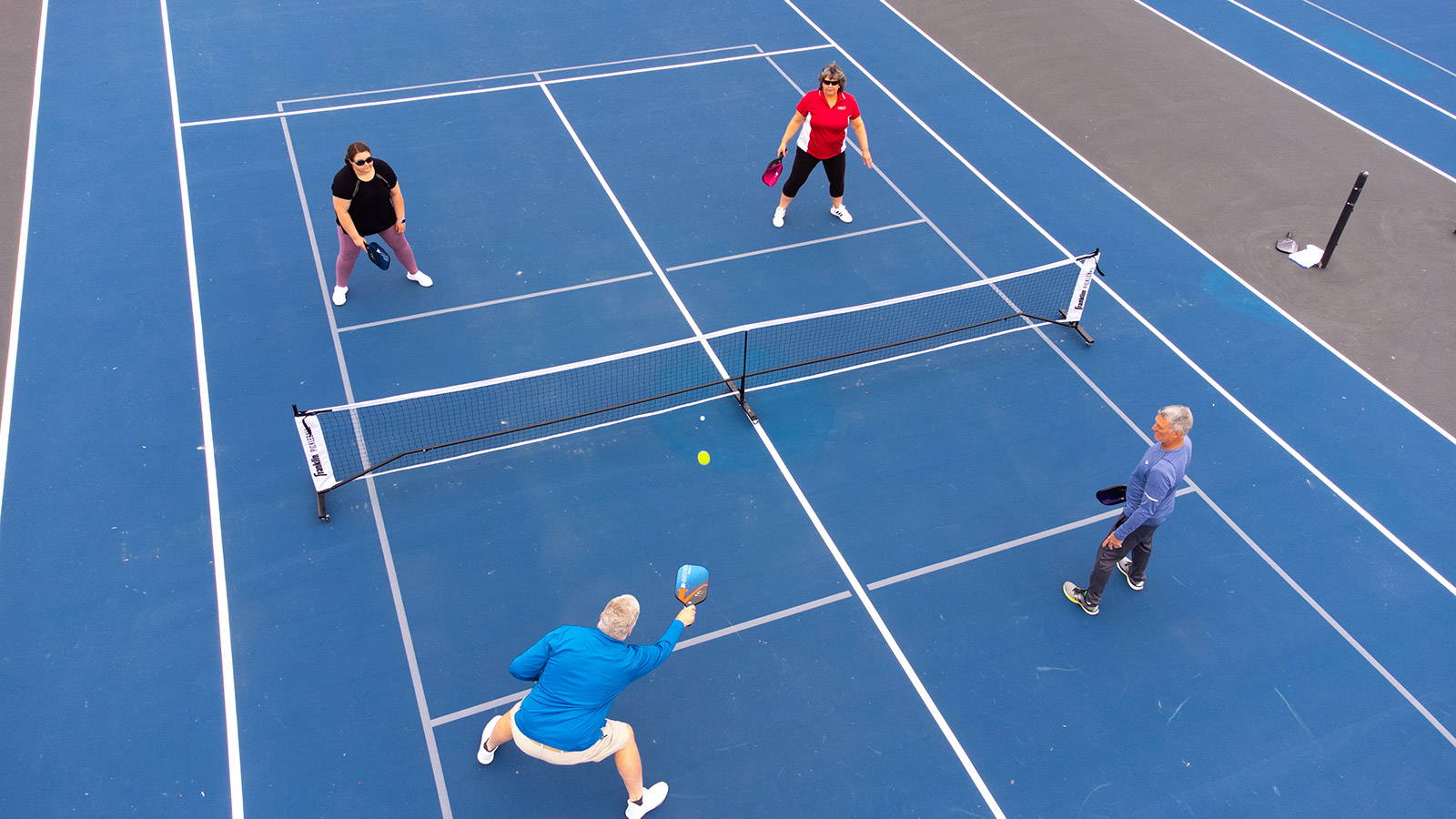 How to Play Smart Pickleball

1) Hit to Your Opponent's Backhand

Your opponent's backhand is probably their weaker side as it probably is for you. This is still mostly true for the advanced player too so many doubles strategies will start with this regardless of skill level.

This really is about finding weaknesses in your opponent and taking advantage of them. Sound mean? Not really - they are doing that to you!

For most, the backhand is the more difficult shot and since more points are won through an opponent error than won by hitting winners, a good shot will almost always be to the backhand. Pickleball strategy is sometimes about you hitting winners, but more often, if the opposing team struggles to hit shots, the higher percentage shot for you is to make them hit that same shot time after time.

Who is the Weaker Player on a Doubles Team?

This is another variety of the finding weakness theme. You will generally figure this one out after just a few points. So hit it to them and don't let the stronger player beat you.

2) Get to the Kitchen Line

Simply put, this is the only place to be. Better angles and control of the pickleball court are the key advantages. There is one obvious issue there and that is the ball is on you more quickly than if you are at the back line. Being in the ready position helps a ton.

Some players fear they can't hit a volley or fear they will get passed or fear they will get hit by a ball hit hard by their opponents. If you stay back you should fear opponent drop shots or fear getting caught at mid court (the infamous no man's land) or fear hitting your next shot a long way that will pounded by the other team who IS at the kitchen line. So if fear is what motivates your play, there should be more fear in staying back.

There can be an issue for some players regarding reaction time. Playing pickleball can be a challenge for this reason but getting yourself back into the pickleball ready position with knees bent and paddle forward after every shot will help minimize the amount of time you need to execute volleys.

3. Stuck There After a Good Deep Serve

If the serving team server hits a good serve deep to your backhand, you might feel you don't have time to move forward. And you might be right. But as more shots are played, if you are still back you simply are not in the best position.

If their shot drives you back, like with a lob, you can hit a shot that leaves your paddle going from low to high arc. As long as you get it deep enough, it should leave you plenty of time to get back to the no volley zone line (NVZ line).

But beware. If you hit a soft shot up in the air too short in the pickleball court, your opponents will pounce on the chance to hit a smash. So the key is to get the ball deep in your opponents court.

Some people simply can't get around like they used to. The idea of charging the NVZ Line, getting the split step, and planting yourself in position for an easy point is great in theory but hard for some in practice.

The game of pickleball does not require everyone to follow the same formula. If your game is to move slowly up where maybe you have to hit certain shots like half volleys from the middle of the service box, so be it. Your team can adopt your own doubles strategies to take advantage of an opponent weakness.

Play the game you can and make the best of it. So what if all things pickleball don't always go your way? The main objective is to have fun so hit the shots that are fun for you!

3) Hit Down the Middle

Let's not get too carried away here. Not EVERY shot has to be a middle shot. But middle shots reduce unforced errors as you are not flirting with the sideline where there is much more risk of hitting the ball outside the lines thereby ending the point.

Sometimes just keeping the point alive is all you need to win the point. Some players however will like to poach if you hit too often down the middle especially if the ball is popped up.

We discussed the idea above of keeping the ball on the opponents backhand. If your opponents are both right handed players, a very common and very effective strategy is to hit down the middle part of the court at the one player's backhand.

Of course, this pickleball strategy gets a bit more complicated if one opponent is right handed and the other opponent is left handed. If both opponents have their forehands in the middle, then hitting to the corners will be smart.

The famous third shot drop shot that is so effective can be a great offensive and defensive shot especially when hit at the opponent's feet. While it can be a difficult shot to master, it will often force your opponents to pop the ball up giving you the advantage of hitting the ball from high to low.

4) Get Your Serve and Return of Serve Deep

New players are just focused on getting the ball in play and keeping it there. This is how it should be whether hitting a forehand shot or a backhand shot.

Even the most basic pickleball tips though, advocate for getting serves and returns deep in the court. Why?

When you can't seem to hit any of your normal shots and your game resembles a dumpster fire and all the fancy doubles strategies on the planet still mean you are on the short side of the score, it is time to go back to basics. The most potent pickleball strategy of all is to get the ball over the net and make your opponents hit one more series of shots, but here is a quick list of basics to be sure are intact in your game:

Have the Right Pickleball Gear

OK, this isn't a strategy but it does impact you and your game. Check to see if you have all of these in good order:

Is your paddle an old solid wood thing that you got while you were in college at some frat party? Well, chances are just a minor investment in a new paddle will improve your game.

See our Buying Guide for pickleball tips for paddles. Check out the latest from Vaught Sports and other market leaders.

Pickleball requires short, quick movements side to side for the return of serve and from front to back to retrieve a drop shot. Find some light shoes with excellent fit and lateral support.

Your opponents won't care about the trendy color but you might. Our clearance site might even have some extra cool deals with better than our regular pries.

Tops, bottoms, socks and other articles of clothing should fit comfortably but not too tightly or too loosely.

Don't ever play with cracked or damaged balls even for a fun game with your kids. Use new balls whenever you can. Take advantage of sales to stock up.

Protect your new paddle and all your stuff with a new backpack or classic duffel. You need a place to store your gear so get the right bag with all the right kinds of pockets.

You don't have to play in official USAPA sanctioned events, but if you do, you will quickly earn an official ranking. This is a great way to see if you are improving or not.

If you don't have a partner, many tournaments will pair you up with someone in your category if they can. This is terrific way to meet new people with at least one thing in common with you: pickleball!

Pickleball tournaments will usually have a round robin type of format within each subgroup with championship matches determining Gold Medalists, Silver Medalists, and Bronze Medalists. Don't miss out on a chance to get your picture taken with all the other winners at the end!

Pickleball was designed by the founders to be a fun game played by everyone. It is fine to be a serious competitor, but the objective is to have fun, get some exercise, socialize with other players and did we mention fun?

The rule book is easy to digest and the rules easy to learn. Check out our summary or read the fine print at the USAPA official site. Every game has their rules but pickleball's are learnable in a few short minutes.

So, now that you are full of strategies, it is time to get out and play!