Anytime you start a new activity, it is very helpful if you learn the terminology as you ramp up the learning curve. This is certainly true with pickleball terminology.

With pickleball terms, there is a mix of rule related terminology, slang and just outright silliness. The good news is that you don't have to be an expert in pickleball terms in order to have fun with the game.

Like all sports, there is an official pickleball rulebook established by the USA Pickleball Association. Knowing a few of these will help you understand the game better.

For tennis players who are taught to rush the net in order to hit the ball in the air the non- volley zone (NVZ) is a tough concept to grasp. This zone is the seven-foot box on both sides of the net that includes the non-volley zone line.

Non-Volley Zone And The Serve

Unique to pickleball is the concept of a two-bounce rule. Like tennis, once a served ball hits in the court area diagonally opposite the server, the ball is in play. But with pickleball, the serving team must also let the ball bounce when returned. The first bounce is on the serve, the double bounce is on a successful return.

Whether the game is a casual fun game or part of tournament play, line calls on your side of the net are your responsibility only. If in doubt or in doubles pickleball if the teammates disagree on a line call, the benefit of the doubt must go to the other team.

This is true regardless if calling the non-volley line the baseline or the sideline. No matter if one is confused by pickleball terminology or not, sportsmanship is a key attribute of this game.

An approach shot is generally hit from the back of the pickleball court so the ball lands deep in the opponent's court allowing the hitting player to charge to the non-volley line.

A dink shot is a soft shot hit in such a way to land in the non-volley zone usually in response to another drop or short ball that hits in front of the non-volley line.

A dropshot volley happens with any player hitting the ball in the air but landing in the pickleball court but just over the net.

A volley shot is any ball hit in the air before it bounces. A volley hitting on or inside the lines of the opposing side of the court that is not successfully returned is a point won by the volleyer just as if it were a groundstroke shot.

The volley llama is not a furry four-legged animal hitting the ball in the air! It is a fun pickleball tournament with a strong charitable message with their own brand of paddle.

A passing shot is usually a hard-hit ball that is designed to go past the players generally standing at or near the non-volley line.

A forehand shot is any shot hit on the same side of the body where they player holds the pickleball paddle. So, if a player is hitting the ball on their right side and they normally hold the paddle with their right hand, it is a forehand.

Pickleball players executing a groundstroke shot or a volley from the opposing side of their body away from the hand where they normally hold the paddle are hitting a backhand.

When a player uses their pickleball paddle to strike the ball on its top or by sweeping their paddle in an upward direction, it will impart top spin. Because top spin causes the ball to dip sharply downward at some point it directly affects play by allowing the hitter to put more pace behind the ball.

A midair pickleball shot is another term for a volley. They are sometimes differentiated from a volley by where the ball is actually struck. A midair shot would refer to balls struck at the waist or below but still hit before the ball bounces.

The third shot drop is considered one of the most important shots to master in order to win. Since the serve and the return of serve must both be allowed to bounce, the one team that is serving is placed in a challenging position of needing to stay back yet facing the other team taking dominant positions at the kitchen line.

If one team hits the third shot drop into the kitchen, the other team will often have to hit a less offensive oriented shot or even a dink, so they don't hit the ball into the net or pop it up for a smash.

Hitting the ball as a double hit is only legal if it is unintentional. If it is done on purpose it results in a dead ball and a fault.

A double hit ball immediately must be called by the player making the hits. In other words, the call is made by the player on themself.

The USAPA governs paddle regulations for sanctioned tournament play. If they have approved a paddle is says so right on the paddle. 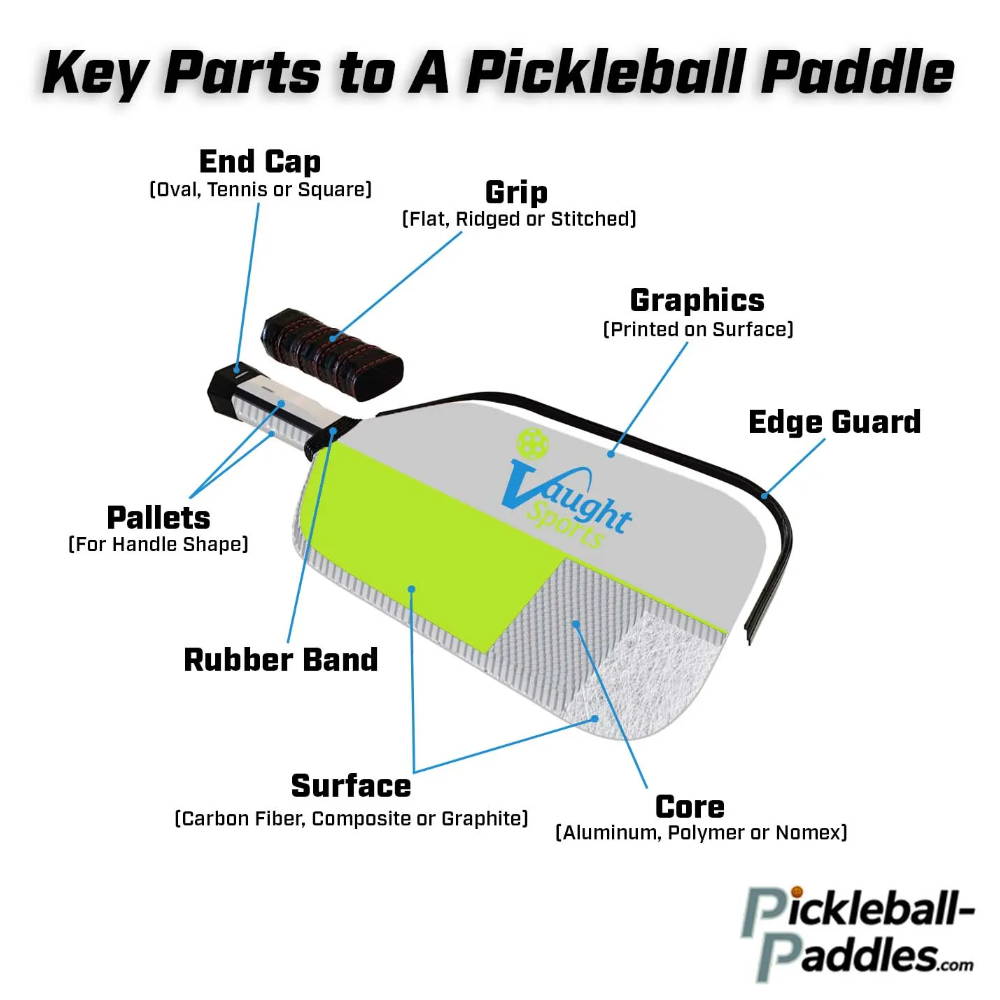 The face is the highly sophisticated surface where the ball is supposed to strike the paddle. The most common materials used in quality paddles are fiberglass composite, graphite, and carbon fiber. The true pickleball addict often has several paddles with different faces depending on the playing conditions, their opponent or even their mood.

Located under the face it could be solid as in a cheap, wooden paddle, but most often it is a honeycomb construction to reduce weight, improve spinning, reduce noise and increase the variety of shots available to the player. While there are still some aluminum cores around, the majority are made of a polymer material.

While not a requirement, many paddles have an especially durable rubber or rubber like material around the edge of the face to protect the paddle from the inevitable collisions with the court.

With a variety of materials, designs and colors the grip is generally wrapped around the handle to keep the hand from sliding around due to perspiration or lack of strength. It also can help manage the vibrations coming into the hand and arm when the player hits the ball hard or outside of the sweet spot on the face.

At the bottom of the handle a cap is in place to help the player keep their hand on the paddle at all times. Some manufacturers will flair the end out a bit to further encourage the hand to stay put during points.

There are two types of foot faults. There is a service and a non-volley zone foot fault.

A service foot fault occurs if the server steps on or over the baseline before making contact with the ball. This rule violation means the point is over and the serve goes to their partner if this is the first server. If it is the second server, a fault like this means it is side out to the other team.

The NVZ foot fault occurs if the player hitting the ball steps on or over the NVZ line while playing a volley. Note this violation occurs even if they hit the volley and their momentum carries them into the kitchen.

A technical foul is generally behavior related as it is in other sports. The rules specify seven different technical fouls that can be called like throwing a paddle.

Repeated violations resulting in technical fouls can result in loss of a point or points.

The service court is the box or court diagonally opposite of the side the server is putting the ball in play from. The server must get the ball over the net and into this box not including the NVZ line for the serve to be in play.

The server continues serving until they lose a rally or commit a fault. The player alternates sides as long as they continue to win points.

Side Out Scoring System

Pickleball is played with a side out scoring system which means you can only win points on your serve. If you receive serve and win the rally, it is a side out. This means the serve goes over to you, but you do not score a point.

A rally point system is an alternative scoring system that says whoever wins a rally gets a point regardless of who served the ball. Because this results in shorter games, broadcast television would like this better.

Ball makers make somewhat heavier and harder balls with fewer, smaller holes for outside play. This is to minimize the impact of the wind.

However, there is no rule that says you have to play with inside balls when indoors or vice versa. It is all a personal choice.

What You Need to Play

With all of this pickleball knowledge, the only thing missing is actually playing the game. For that you need only a paddle, ball, and net.

Pickleball-paddles.com is your one stop shop for everything pickleball related. From paddles to apparel for men and women to shoes to bags to carry it all - we have what you need.

Call us! Our in house team of experts is here to help you every step of the way. And they are friendly too!

Our prices are competitive every day but don't forget to see our sale merchandise too. But these are here today and gone tomorrow items with very limited availability. So, if you see something there you like, get it now before someone else picks it up.