The year 1965 was an important year. Among the most notable events in the world of fun and leisure, The Beatles had their first mega concert at Shea Stadium in New York, A Charlie Brown Christmas was broadcast for the first time, and the history of pickleball kicked off as pickleball began in the backyard of a few inventive Bainbridge Island, Washington residents.

Pickle ball (now called pickleball) was created to satisfy the challenge of a bored teenager. This fun story of pickleball's history is one of catching lightning in a bottle resulting in America's newest racquet sport that is the fastest growing sport in the United States and a growing presence all over the world.

The founders of pickle ball Joel Pritchard, Bill Bell and Barney McCallum were all acquainted and spent plenty of time on Bainbridge Island. Challenged to invent a game to occupy Joel's bored teenaged son, Joel and Bill went into Joel's father's garage workshop and grabbed a bunch of what would evolve into pickleball stuff and launched pickle ball.

No, they didn't have any carbon fiber just laying around, but they did have ping pong paddles. They didn't last long so they enlisted Barney McCallum to construct something more durable and the first pickleball paddle was born.

First Pickleball Paddles Made out of Wood 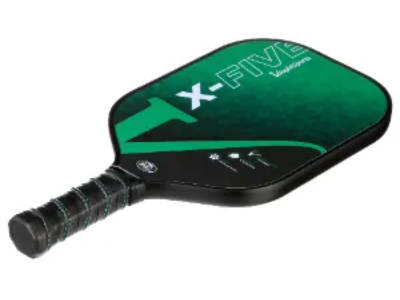 The first game started by grabbing a handy wiffle ball. The game's equipment quickly moved away from a wiffle ball as the holes were only on one side causing massive curves in shots and they didn't hold up anyway.

When you play pickleball today, the foresight of Joel Pritchard and friends, accidental or not, really comes through. The official ball today has the holes all over the ball and has a series of standards that must be followed in construction. See our discussion of the Best Pickleball Balls for details.

Joel Pritchard had recently paved an old badminton court as steady Seattle rain necessitated a hard surface. While the first permanent pickleball court was not set up until 1972 on Bainbridge, the dimensions stuck and are still intact for pickleball courts today.

They quickly found that having the net portable was handy. So just like the rest of pickleball equipment, having the net easily set up and taken down became a part of the way pickleball invented a game that can be played anywhere anytime. Joel Pritchard Bill Bell and Barney McCallum wanted a low-cost game that anyone can play and they got it! 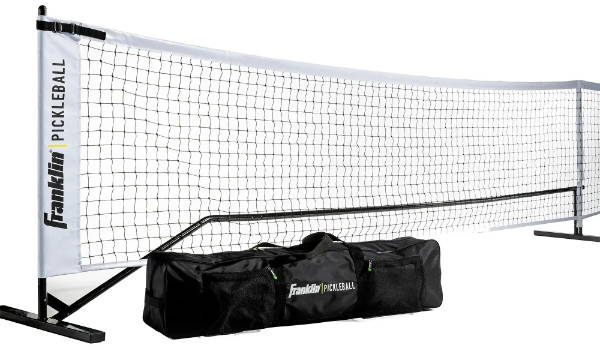 They quickly found that having the net portable was handy. So just like the rest of pickleball equipment, having the net easily set up and taken down became a part of the way pickleball invented a game that can be played anywhere anytime. Joel Pritchard Bill Bell and Barney McCallum wanted a low-cost game that anyone can play and they got it!

Why is the game called pickleball? There has been some confusion about this but Pickleball Magazine resolved this debate some time ago.

The official Pritchard family story surrounds their love of many college sports including crew race competitions held in the Bainbridge Island waters near their home. In a regatta, rowers left over after any official competitions, would hold their own competition in random boats called a pickle boat.

How the Pritchard family dog got associated with the name is just a funny story and not the real story. As other Bainbridge pickleball locals heard about this new game, play spread and the game began to get its first mass media exposure.

In one interview given to a national observer, Joel decided to make up a story just for fun. He talked about their dog Pickles being the inspiration for the name having been adopted out of a flea ridden puppy litter. When investigated though, it was revealed that their dog Pickles was actually born in 1968 so the fun dog story was debunked by the good people of Bainbridge Island.

A very early tournament was held at South Center Athletic Club in Tukwila, Washington in 1976. College tennis players made up many of the players.

In 1984 the predecessor of the USA Pickleball Association (USAPA) was formed (called United States Amateur Pickleball Association) and ultimately became a non-profit with the specific intent to promote and expand the game. Codified rules followed and equipment standards established under the USAPA Rules Committee.

Sid Williams began playing pickle ball early on and organized a pickleball tournament locally in Washington State. It seemed natural for him to be named as the first Executive Director.

The Arizona Senior Olympics demonstrated the explosive growth by including pickle ball in 2001. Eventually, the National Senior Games Association saw the popularity and included the game in its regular schedule.

In 2009 the first USAPA National Tournament was held and the US Open Pickleball Championships initiated in 2016 and has been held ever since.

In 2017, the Pickleball Hall of Fame was established and is now located in Kent, Washington next to the Pickleball Museum. This is not too far from the founder's home on Bainbridge Island.

Now with millions of players and over 53,000 official members in the USAPA, there is regular TV exposure and a massive internet presence including lists of places to play in all 50 states and many foreign countries.

1) A Game for Everyone

The founders wanted to make the game as accessible to as many people as possible. They made it deliberately easy to learn, inexpensive to play and fun for people of all ages and physical conditions.

One of the main rules is that if there is any doubt about a line call or the score or anything else during a game, the benefit of the doubt goes to the other side. Misbehavior is not tolerated unlike other sports.

The rules like those below and equipment like a low bouncing ball are all set up to encourage longer points and easier learning. People who have never been involved in sports of any kind find that they can play pickleball even if they have limited mobility or conditioning.

It certainly true in tournament play, more experience, better paddles, and stronger conditioning will payoff in wins. But even in tournaments, the USAPA rating system will separate beginners from intermediates from experts further encouraging participation.

Even though the official rules of Pickleball are very easy to learn, there are a few unique twists that new players should learn. See our Beginner's Guide for details.

The serve and the return of serve must both be allowed to hit the ground before they can be returned. The whole idea is to encourage longer points and more fun for everyone on the court.

The area nearest the net is called the non-volley zone or the kitchen. If a player is touching any part of this area, including the lines, that player may not hit the ball in the air.

This creates all kinds of opportunities for finesse shots called dinks or even shots hit very softly so they barely clear the net called drops. This purposely creates the opportunity for very long rallies but remember, when the ball bounces, you are permitted to be in the kitchen and hit the ball.

As a highly social sport, the majority of play is in doubles but singles is also highly popular. Even three player games called cutthroat are permitted. Since the court is much smaller than a tennis court, players of all ages, young and experienced alike can play regardless of overall mobility.

Serving the ball may be hit out of the air or after a single bounce but either way the paddle must be pointed somewhere toward the ground. The server must hit the ball into the proper service court which is diagonally opposite from the server.

The opponent's service court includes the back (or base) line, the sideline, the center line but not the kitchen line.

Games are generally to 11 with points only won by the server. Tournaments are often the exception with games to 15. In any game, the winning team must win by a minimum of 2 points.

The server must get the ball in play on their first attempt. If they are unsuccessful, the ball goes to their partner and if they are not successful in getting the ball in and win the point, the serve goes over to the opponents.

If you are the second server and your team is behind 4 to 6, you announce 4-6 on 2. If there is any question about the score, play must be stopped immediately until everyone agrees on the score.

Pickleball-paddles.com is delighted to be a part of the history of pickleball by being an outstanding suppler of all kinds of pickleball equipment. Look to us as your one stop shop for paddles, balls, shoes and bags.

Be sure to check out our clearance site for amazing deals with prices below our already competitive prices. We love to help so feel free to call our friendly experts with any questions!